Contribution of Japanese television to tourism

Japanese television broadcasts are increasingly being broadcast abroad, including traditional live broadcasts and online distribution services. This growth in Japanese-made programs has helped spark interest in Japan in foreign countries and is playing a role in the ongoing tourism boom in Japan.

Japan welcomed more than 28 million foreign tourists in 2017, a more than three-fold increase since 2010, when around 8 million people from overseas visited. One of the many conceivable factors contributing to this rapid growth is the increase in sales of Japanese television shows abroad. Revenue from overseas sales of Japanese-language content totaled some 6.6 billion yen in 2010, a figure that rose to 39.4 billion yen in 2016. their culture and lifestyles, and so visit Japan more and more.

According to a report by the Ministry of Interior and Communications analyzing overseas sales of content broadcast in Japanese in 2016, cartoons accounted for 80% of sales of marketing rights, which cover live broadcasts, online distribution. , videocassettes and DVDs. Dramas and variety shows made up the bulk of the remaining 20%. One of the main reasons for this sales gap is that while the ability to understand Japanese is a barrier for overseas viewers who watch live dramas, anime as a market segment is able to transcend this obstacle. The report also shows that the main overseas markets for Japanese broadcast content are in Asia and North America. The following is a discussion of the characteristics of the various media segments. 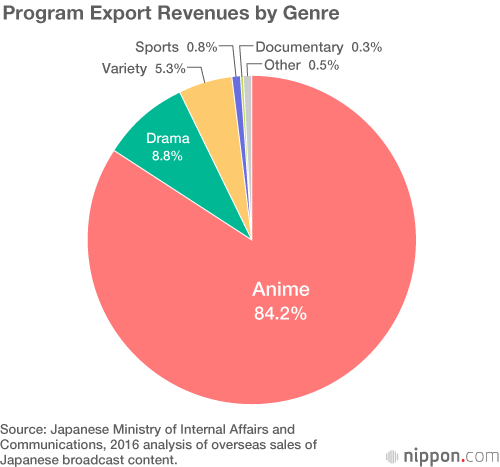 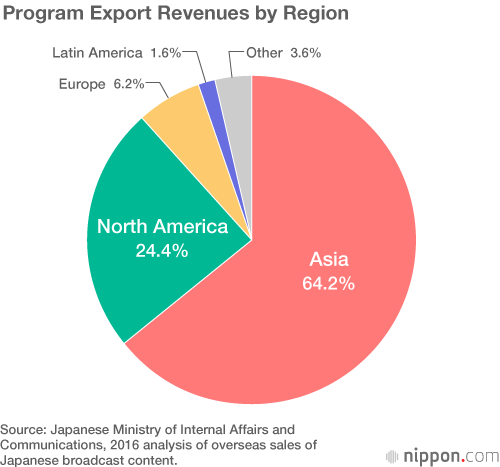 The potential of the anime

Japanese animation first gained world recognition in the 1980s. At the time, public television channels in Europe were being privatized, and cable and satellite television was also starting in earnest, leading to a global rush. for programming to fill the expanding waves. Buyers lined up to do business with distributors capable of delivering cheap content in large quantities, with American television dramas and Japanese animation the focus of particularly intense interest.

While European elites viewed such large inflows of content as cultural imperialism, Japanese producers were in fact motivated to sell their wares abroad not out of a desire to impose their culture on others, but through a sense of internationalism. This influx of Japanese anime created a generation of European fans who grew up watching such content. They have subsequently been the driving force behind Japanese pop culture events across the continent, the best known of which is Japan Expo, which takes place in July in Paris.

The advantage of anime as an industry is that there is an established system of division of labor between editors who work on formatting and development based on manga or prose novels and TV stations and movie studios that produce the animated version of the works. Entertaining stories are essential to making compelling films, and associations with the publishing industry in Japan result in a supply of high-quality source material that turns into widely engaging content.

The rapid proliferation of online distribution services (some have even called it a bubble) has resulted in another global shortage of content in recent years in recent years. While the potential of the Japanese animation industry to provide desirable products is still strong, inquiries about cartoons are once again pouring in from all over the world. Online distribution providers in China and Netflix in the United States are particularly proactive in this regard.

Anime as a media segment has growth potential in many ways. In addition to the existing business of providing video material, it is also a hotbed of intellectual property. In addition to the conventional merchandising of toys, food and stationery, events such as anime song festivals are now held.

So-called pilgrimages, involving visits to places that appear in cartoons, are another such activity, known in the United States and Europe as content tourism. It is common for Japanese cartoons to feature actual locations for places in history, which in part motivates tourists to want to visit Japan.

New business developments are also emerging, such as a project designed by the Japan Anime Tourism Association in which members of BNK48, a popular pop idol group in Thailand, visit various animation venues across Japan. and introduce viewers to local products and places of interest. The project is a collaboration between the Thai TV channels that broadcast the programs and the production companies and Japanese channels that produce them.

In 2017, two dramas from Japanese broadcaster NTV, Mother released in 2010 and Women which aired in 2013, was talked about a lot in marketing circles abroad. The reason was that the Turkish remakes, called Anne and Kadin, mother and wife respectively in Turkish, had become hits, giving rise to further developments in the market.

Anne has been broadcast to more than 20 countries to date, including Mexico, Chile, Croatia and Serbia, while TV channels around the world are similarly making offers for Kadin. The fact that a Turkish remake of a Japanese TV series has become a worldwide success is remarkable because it means that sales of remake rights to drama series and other programs are now a viable option for overseas companies. as well as selling complete product packages. But it goes without saying that in order to be successful in the remake rights market, the original drama must have an entertaining story and endearing characters within itself.

Another media segment comparable to sales of drama remake rights in terms of activity is the export of the variety show format. The TBS series Ninja Sasuke Warrior is a very successful example of this formula. The show, which features competitors facing an increasingly difficult set of obstacles, has aired in 165 countries and regions around the world to date and has been particularly popular in the United States, Taiwan and Malaysia. .

In addition to TBS, other stations affiliated with the Anchor Network, notably in Tokyo and Osaka, also broadcast popular variety news programs internationally. In partnership with production houses and influential local agencies, these stations produce these programs, which are localized for their particular regions, end-to-end, from global format to specific segments. These programs are in turn sold by the partner companies to the local stations which broadcast them. The whole market has also grown beyond just selling programs, with some stations also investing in local production houses, playing the role of international collaborators, and founding local businesses in places like Taiwan and Singapore.

During the current decade, many infotainment programs have been broadcast in Japan which collectively could be referred to as “walking tours”. In these shows, comedians and other artists roam the streets of a city, stopping to eat in stores and visit neighborhood businesses. When these shows are sold to foreign broadcasters, viewers can enjoy authentic information about tourist destinations and cuisine from all over Japan, motivating people to visit. The intentions of a number of disparate groups come together to make this a lively media segment for foreign companies that includes local governments wanting to publicize their cities, TV stations facing production budget cuts, and media agencies. talent who want to promote their clients.

Hokkaidō TV stations have been successfully involved in this media segment since the 1990s. They have produced content that has attracted tourists from the tropics and subtropics as well as the southern hemisphere, many of whom are fascinated by the climate. winter and the North Island diet, providing a welcome boost to struggling regional economies. Likewise, Kyūshū TV stations have produced programs featuring well-known hot springs like Yufuin and Beppu. Stations in the Tōkai and Hokuriku regions have also teamed up to create shows at major sights along the extensive Shōryūdō sightseeing tour route that runs through central Japan.

Programs that feature local ramen specialties are also popular abroad. Although the noodle dish can be found all over Japan, the specific ingredients and flavors vary by region, and these shows highlight the distinctive characteristics, leading to a visible increase in the number of foreign tourists to ramen shops across the country. country.

TV shows based on topics such as tourism, traditional culture and foods like sweets, seafood and haute cuisine and communal cooking are produced and broadcast abroad through collaborations between various stations television, regardless of their network affiliation. These programs contain a huge amount of information. There is simply no comparison in this regard between today and the previous decade, when Japan was only ranked around 30th in volume of international tourists and hardly anyone had heard of places. in Japan apart from Tokyo and Kyoto.